Here are sections from Topeka’s Traffic Regulations that are pertinent to bicycling. Read the original regulations in the city’s CH142-TRAFFIC-AND-VEHICLES.

Sec. 142-454. Use of skateboards, roller skates or bicycles prohibited.

It shall be unlawful for any person other than a law enforcement officer in the performance of his official duties to use or operate any skateboard, roller skates or bicycle at any time within any municipal parking stations owned and/or operated by the city. A person convicted of violating this section shall be deemed guilty of a misdemeanor and punished in accordance with city ordinances. (Ord. No. 16594, § 1(43-462), 5-11-93)

(a) No person shall ride a bicycle upon a sidewalk within the central business district. (b) The traffic engineer is authorized to erect signs on any sidewalk or roadway prohibiting the riding of bicycles thereon by any person, and when such signs are in place, it shall be unlawful for any person to disobey such sign. (c) Whenever any person is riding a bicycle upon a sidewalk, such person shall yield the right-of-way to any pedestrian, and shall give audible signal before overtaking and passing such pedestrian. (d) No person riding a bicycle on a sidewalk shall exceed a speed of five miles per hour. (e) This section shall not apply to a law enforcement officer engaged in the performance of his official duties. (Ord. No. 16594, § 2(43-586), 5-11-93)

[References are to the Kansas State Statutes] 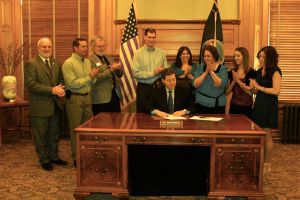 KVBC registered a Board member as a lobbyist during the 2011 legislative session, and worked behind-the-scenes to promote a 3-Foot law for all Kansas cyclists. These efforts were successful when Governor Sam Brownback signed the bill into law. It took effect on July 1, 2011. Present at the ceremonial signing (pictured) were KVBC Board members and the Tim Roberts family, who also lobbied for the law after losing Tim in a cycle-vehicle accident.

A great debt is owed to all the Kansas cyclists who contacted their legislators and let their voices be heard. Special thanks goes to the Kansas legislators who actively supported the law: Sen. Vicki Schmidt (Topeka), Rep. Vern Swanson (Clay Center), and Sen. Dwayne Umbarger (Thayer).

The following rules shall govern the overtaking and passing of vehicles and bicycles proceeding in the same direction, subject to those limitations, exceptions and special rules hereinafter stated:

(a) The driver of a vehicle overtaking another vehicle proceeding in the same direction shall pass to the left thereof at a safe distance and shall not again drive to the right side of the roadway until safely clear of the overtaken vehicle.

(c) (1) The driver of a vehicle overtaking a bicycle proceeding in the same direction shall pass to the left thereof at a distance of not less than three feet and shall not again drive to the right side of the roadway until safely clear of the overtaken bicycle.

(2) The driver of a vehicle may pass a bicycle proceeding in the same direction in a no-passing zone with the duty to execute the pass only when it is safe to do so.

KVBC assisted ABATE Kansas, a motorcycle advocacy group, in lobbying for a dead red provision. This law took effect July 1, 2011. It allows both bicycles and motorcycles to proceed through a red stoplight if the signal is not triggered.

(4) The driver of a motorcycle or a person riding a bicycle facing any steady red signal, which fails to change to a green light within a reasonable period of time because of a signal malfunction or because the signal has failed to detect the arrival of the motorcycle or bicycle because of its size or weight, shall have the right to proceed subject to the rules stated herein. After stopping, the driver or rider shall yield the right-of-way to any vehicle in or near the intersection or approaching on a roadway so closely as to constitute an immediate hazard during the time such driver or rider is moving across or within the intersection or junction of roadways. Such motorcycle or bicycle traffic shall yield the right-of-way to pedestrians lawfully within an adjacent crosswalk and to other traffic lawfully using the intersection.